“A to Z” is a set of visual applications originally created in 2005, to be used during performances at Lux club, Lisbon, by Djs A to Z (Rui Vargas and Rui Murka).

Soon after starting their VJ residency at Lux (Lisbon) in April 2005, Video jack started playing regularly with DJ Rui Vargas in the Lux dance floor area (ground floor) and with DJs A to Z (Rui Vargas with Rui Murka) in the bar area (first floor).
As the name suggests, A to Z’s style is very eclectic, which poses a challenge for VJing. After some discussions with Rui Murka, we decided to develop a customized set of visuals for A to Z, that embraced the variety of approaches of the DJ duo. We opted for visuals based on text and photos, as it would allow to quickly develop a large amount of material. Previously we had been using only animation (either more traditional or more algorithmical), which takes more time to build. In technical terms, Nuno’s idea was to create databases (in XML) of sentences, words, and image files, and an engine (in Adobe Flash) that would sequence them and present them in an attractive way.
For the text applications, Rui Murka suggested extracting parts of lyrics of songs for the sentences, and also showcasing names of artists that are important for A to Z. For the images, Video Jack suggested using André’s database of faces (that he created for his caricature work). The engine was created quickly, in the space of 2 weeks. After a few more weeks, Rui Murka had supplied us all the sentences and artist names.

With these elements, we created several applications:

We have continued to use these applications (except the ones that mention explicitly “A to Z”) in our VJ performances. The approach used in “A to Z” was also useful for another project, “FMI”, that pushed further the use of words and photos.

“A to Z” is a Video Jack project, by André Carrilho (design) and Nuno N. Correia (programming). 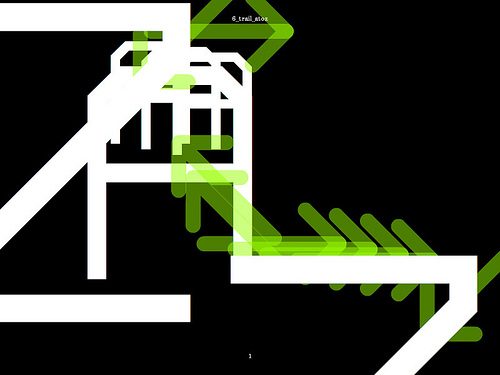