In June 28th 2007, Video Jack participated in a tribute show to José Mário Branco, one of Portugal’s most important singer-songwriters. His work “FMI” was the focus of the tribute.

About José Mário Branco and FMI

Excerpts from Wikipedia:
José Mário Branco (born Porto, 25/5/1942) is a Portuguese singer-songwriter.
A main participant in the Portuguese interventionist music scene, he started his career during fascism, having been persecuted and exiled in France, between 1963 and 1974. José Afonso, Sérgio Godinho, Luís Represas, Fausto and Camané, among other musicians, worked with him.
Between interventionist music, fado and other styles, the most famous of his works are Ser Solidário, Margem de Certa Maneira, A Noite and FMI.
FMI is a synthetic work of the Portuguese revolutionary movement with its dreams and disillusionments. (*) It was released in 1982. The FMI song that gives name to the album is a 20 minute piece that was written in 1979. FMI was forbidden by the author to be diffused through TV or Radio. The acronym “FMI” refers to “Fundo Monetário Internacional” (International Monetary Fund in English).
(*) The Portuguese revolution against the fascist dictatorship took place in 25/4/1974.

The students of Portuguese media arts school Restart decided to pay tribute to the 25 years of FMI, by inviting a number of Portuguese artists and musicians to revisit the work. The musicians created different new songs, with FMI as a starting point. Video Jack (me and André Carrilho) were invited to create a live video performance for the opening of the event, to accompany the song FMI, which was played in its 20 minutes duration from the original 1982 record. The venue was Music Box, in Lisbon.
More information about the event (in Portuguese):
http://www.myspace.com/fmi28junho

The invitation to participate in FMI posed a challenge – how to create 20 minutes of quality video material in a short time, adequate to the themes of the FMI song, flexible enough to be shown as a performance and allow for improvisation?
The solution Video Jack came up with was to concentrate on photo and text content for the visuals. We would use custom created applications to sequence the photos and text, in a thematic dialogue to the music.
Nuno had just finished programming the application “Bio Photo”, a photo sequencer, for a workshop and performance in Tallinn (VJ Factory). A similar application would be needed to sequence text, and was subsequently developed – “Bio Text”. During the shows, one of the computers would sequence the photos, and the other sequence the text. A video mixer would bring the two elements together as a collage. Two small animations were also created to provide additional variety to the material. A couple of older animations were also used, together with ID elements for the show.
Having the applications ready, the photo and text material were needed. We enrolled the collaboration of Restart student Marzia Braggion for the photos. Having isolated central themes from the FMI lyrics, we asked her to take sequences of photos based on those themes. André then organized these files into groups, in accordance to the lyrics. An XML file was created as an index of the photos for the Bio Photo application. Regarding the text material, André edited the FMI lyrics into a XML file that could be processed by the Bio Text application.
The feedback from the performance was very positive, namely from José Mário Branco, who was present at the event. One comment that was repeated by different people in the audience was that our approach had made it easier to understand the lyrics. 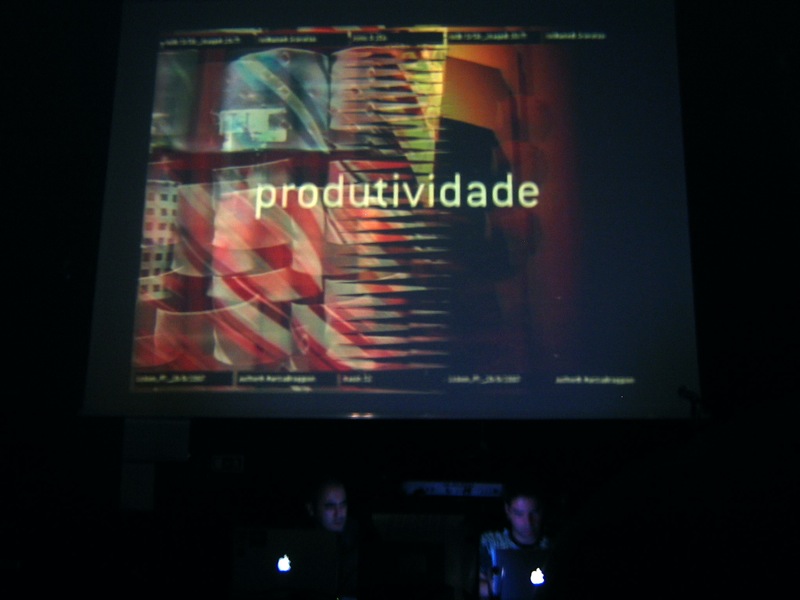