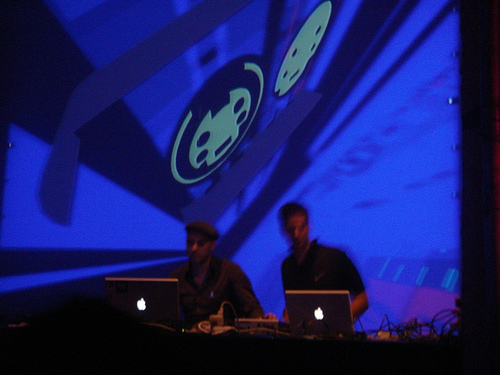 Video Jack performed on 21/22 September in NAME (Nord Art Musique Electronique) festival, in Lille. The festival took place in La Condition Publique, in Roubaix (Lille area). The venue was an old, industrial looking building with 3 rooms with simultaneous performances, and a room for new media art installations. Video Jack crossed paths in festivals this year again with the Reactable crew (after London and São Paulo), and also with a number of performers/VJs that were at PixelAche (@C, Orchid Byte, Random Doctors, Tencu & Misu, Propaganda).

Overall, the quality of the organization of the festival was quite high (and I’ve been to a few of these this year…). All the logistics were very well taken care of. The artists had a huge area, with a dedicated restaurant and bar. There were some interesting details, like the party bathroom with DJs (!!!). A lot of care was given to the VJ side of the festival – all 3 rooms had impressive screen setups, with multiple projections on several walls. The line-up of the festival was of very high level in terms of the contemporary electronic music scene.

We VJ’d on the first night with Ellen Allien and Alter Ego. Ellen Allien’s set was quite powerful, as expected. She was the headliner of the festival, and it was probably the peak in terms of attendance. She managed to give the large and enthusiastic audience a memorable set. Because she is also a favorite of mine since I first saw her play in Barcelona in 2004, it was a highlight also for Video Jack to meet and VJ with her. As was to VJ with Mathew Dear the next day, another of my favorite musicians at the moment, both under his own name and as Audion and False. After Ellen Allien we VJ’d with Alter Ego, and after Mathew Dear we played with Loco Dice. Both also gave great sets.

Because we performed both nights, in a total of more than 6 hours, I didn’t get to watch many performances. Modeselektor played a live set on the 21st before Ellen Allien (their label boss…). They’d just put out their second album, it was quite interesting to see it played live. They succeeded in energizing the audience, and pulled some quite funny stunts (one of the duo showered the audience with 2 bottles of champagne…). I watched a bit of The Orb’s show on the 22nd, who disappointed me both musically and in terms of visuals. Everything seemed very 90’s… But maybe that was the point.