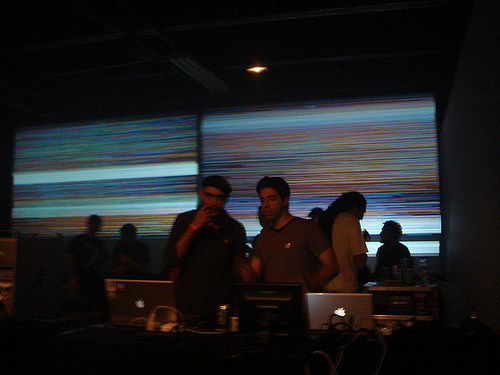 This year we played for the second time in the NAME festival in Lille, France. Again, this proved to be an extremely well organized festival, with great DJs, VJs, live music, and new media installations.

On the first night, we played with Tiefschwarz and also Phage & Daniel Dreier.

On the second night, we played with Radio Slave and Danton Eeprom.

All the DJ performances were very high level, as one would expect. Radio Slave’s was possible the most creative and memorable one, in my opinion.

For this show, we premiered some fresh new material from our Master and Margarita project (2 sets/chapters). We realized the visual material from one of those chapters was too slow for VJing.

We also premiered a new generative-based VJ app within the “B.i.o” family, called “Bugz”. Basically, they are 3 sets of animations. 2 sets of animations are floating around the screen. When they collide, or when a “hot key” is pressed, a 3rd animation is triggered. André conceived animations inspired by antenna noise and visual glitches. We were very happy with the result. The new material works very well as “lighting effect”, as the fast moving bright/dark graphics have an almost strobe light effect on the room. The noise-like visuals also works quite well as mask to other visual material.

We had very good reactions to the performance, namely through our MySpace page.

We didn’t see much of the remaining performances. VJs Cinétronics performed before us those nights, and they put up an excellent show:
http://www.myspace.com/cinetronics
As the name says, very cimematic, with sharp editing and coherent visuals.

The Chloe DJ set was dark, unpredictable and mysterious.

The !!! live performance was fantastic and very energetic.