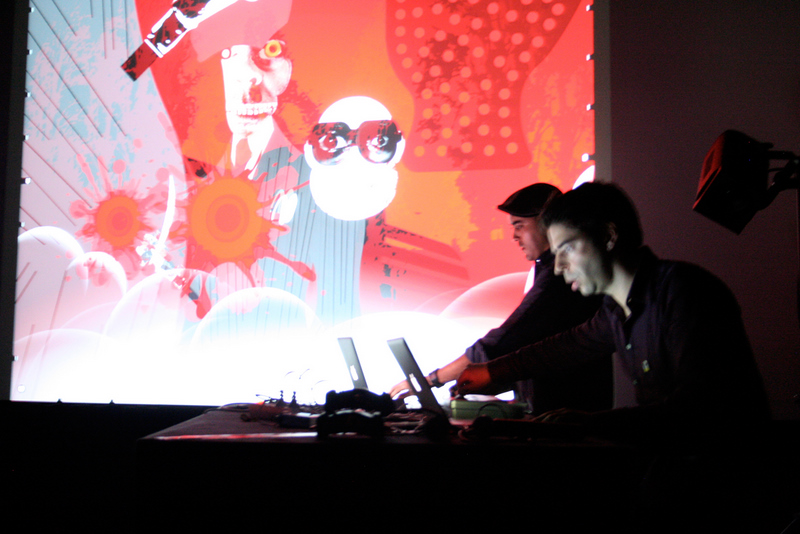 On the 15th May 2009, Video Jack performed at Mapping Festival, Geneva. We presented our “Master and Margarita” AV project, at Cinéma Spoutnik. The space was very central and multifunctional, with different areas – an auditorium (where we performed), a club (for DJ/VJ performances) and a very generous backstage room.

The performance went quite well. It was our second full Master and Margarita show, after the presentation at PixelAche festival on the previous month. We felt we were more fluent with the music and the visuals than in the previous show. We had good feedback in the end of the performance, with members of the audience coming to us and expressing that they enjoyed the audiovisual experience, the exuberance of color and the narrative animation.

Because of the connections between the festival and Modul8 software (http://www.modul8.ch/), we were offered 2 licenses of the software, which we will be exploring in the coming months.

The Mapping festival is an international visual and audio festival based in Geneva, Switzerland.
The festival was formed in 2005 around the goal to promote the VJ medium, its culture and its connection to electronic music. Since then it has evolved into presenting related projects in contemporary art such as audiovisual performances, and interactive installations as well as including workshops and lectures that further emphasize the aspect of community that is a strong component of VJ movement.

Mapping projection performance from Exyzt in the outside of Cinéma Sputnik, with violin player hanging from the wall, was very engaging.
http://www.exyzt.net/

Pussykrew’s AV set was very good. It was the second time I saw them live, and they have already matured in a short period of time. They have their own universe, which is something quite difficult to achieve, and they are expert mixers, using mostly old analog equipment. Vinyl-manipulation based music is otherworldly. These guys will be huge when they step into the next level.
http://www.vimeo.com/pussykrew/

The Parasite light installation by Sigma6 at the entrance of Usine (the larger complex of which Sputnik is part of) was hypnotic and disorientating.
http://www.sigma6.ch/

Projections on buildings in different parts of the city were a very nice touch, and good promotion to the festival.