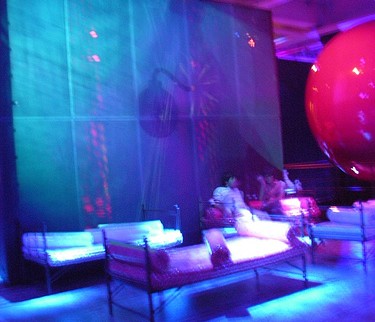 Lux is one of the largest clubs in Lisbon. Its manager is Manuel Reis, who had previously founded the (much smaller) Frágil bar in the Bairro Alto area of Lisbon. Frágil changed the landscape of Lisbon nightlife when it open in the mid-80’s, and Lux did the same in Lisbon in 1998 (in a bigger scale). Some of the most important names in the dance music and electronic music international scene have played in Lux. One of the characteristics of Lux, when it opened, was the importance it dedicated to VJing and video art. On the ground floor, around 4 video projectors were used, and in the first floor about 8. Particularly in the upper floor, VJing was a main element of the decoration. Specially in the early days, Lux increased the visibility and awareness regarding VJing in Lisbon.
http://www.luxfragil.com

2. Start of our VJ residency

Video Jack started working at Lux, Lisbon, on the 2nd April 2005. We had submitted a demo DVD to the club in the end of 2004. The reaction was positive, and we were soon booked for VJing there – although we had never done VJing with other DJs before, only audio-visual performances with our own music. Eventually we became resident VJs, and we performed there for 2 years. But during the first year the number of performances was much more intensive. After Spring 2006, Lux changed decoration, and the VJing element of the club was lessened. In the beginning of our residency (for the first 6 months approximately), me and André performed at Lux together. Later, we would go mostly alone.

When we started, the main material we had was from our “Heat Seeker” project (based on the “InGrid” software engine developed by us), complemented by extra animations André developed meanwhile. We used a video mixer for the first time at Lux. In our previous audiovisual performances we had used only our own software for mixing.

The “InGrid” material had two limitations. First, it demanded constant attention and interaction, which was quite tiring for the 6 hour performances at Lux. Second, it was adequate for the bar area, but not for the dance floor, which demanded darker material, because of the low lighting. The “InGrid” material was too colorful and bright for that.

Therefore we decided to build a new application, that would share the same approach as the animated icons in “InGrid”, but would add generative animation, instead of manual operation. It would consist of abstract modules over a black background (although other color could be chosen), in order to better articulate with the lighting system at Lux, and to create the illusion of elements floating in space (instead of the typical 4:3 projection rectangle). We came up with the idea of modules animated by different behaviors, which in turn sparked the development of animated modules that would work well with those behaviors. Some visual modules were initially adapted from “InGrid”. The new application was entitled “B10”, and became the basis for further developments (still ongoing) and several spin-off projects, namely “Idiot Prince” (2006). We also created video games within the “B10” framework, which we would play during our performances.

In early 2006, Lux was looking to rethink their approach to VJing, and asked us for a proposal for a video direction for the club. We submitted a proposal based on a network of computers with centralized content management, and included content suggestions. At the time, Lux was using a solution based both on VJing (for the main screen) and on DVD players (for secondary screens). But our suggestion was not implemented, and Lux would eventually take away most of the video projection by the time of the dance floor renovation work, during Spring 2006 (one year after we started VJing there).

We released our “Heat Seeker” DVD in Lux in July 2006 (including “Idiot Prince” material), which summed up our experiences of audio-visual performances since 2004, and VJing at Lux until that point.

4. Working with Rui Vargas and A to Z

At Lux, we developed a closer work relationship with DJ Rui Vargas and DJs A to Z (Vargas with Rui Murka). In the first year of our residency at Lux, we played about 21 times with either Rui Vargas or A to Z. We developed customized visuals for A to Z:
http://www.videojackstudios.com/atoz

5. Highlights from the residency

Among the highlights of that period were performances at Lux’s 7th anniversary party (2005); MTV Soundsystem (warm-up to the 2005 MTV Europe music video awards); and New Year’s Eve 2005-2006.

In our first and more intensive year of VJing at Lux, we performed 29 times there; 13 times at the bar, 16 at the dance floor.

Overall, we learned a lot by VJing at Lux, and it was always a pleasure to work with a very professional and positive staff, enthusiastic audience, and talented DJs. After all, we had been going out a lot to Lux since it had opened, almost 7 years before we started working there.

A to Z screenshots: