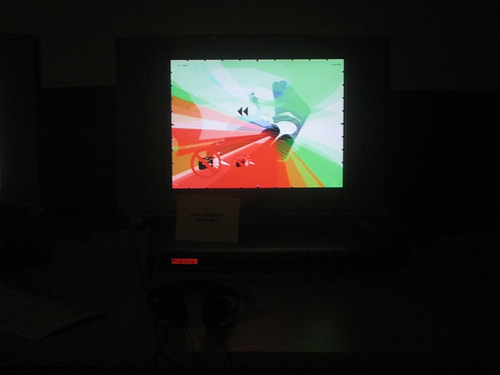 The British Film Institute (BFI) have once again joined forces with audiovisual artists and producers Addictive TV and new-media curators Cinefeel to present what promises to be a 2007 must-see spectacular celebration of visual music.

“Digital technologies have profoundly altered the way we produce and consume music and moving images. As the equipment becomes increasingly sophisticated and available, we are experiencing an explosion in personal expression.” says film director and BFI chairman Anthony Minghella “As part of the Sony PlayStation Season, Optronica is a colourful and vibrant celebration of this outpouring.”

2. Participation in the Optronica Festival – Lounge

Optronica Lounge was the meeting area of Optronica. It was also an area where screenings were presented and video installations were shown. They showcased several DVDs (namely my “Heat Seeker” DVD) and other projects. Reactable (see topic 3., 17/March/2007), was also shown there, as was Gridio by VJamm, Arkaos software demos, and works by Addictive TV. This was also an interesting place to meet some of the artists, and other players in the area, like R&D manager from Pioneer; VJamm (groundbreaking software co-created with Coldcut) developer; festival organizers from different countries; other researchers on audio-visual art; and Optronica organizers Addictive TV and Cinefeel.

This was the opening night, Trevor Jackson and Lemon Jelly (Fred Deakin and Nick Franglen) performed at the BFI Imax.

In the afternoon there was a screening programme called Optronica On Screen. From it, I would highlight “Wingbeats” by Thomas Newton. The work is based on producing sounds out of bird movements, flight patterns, and intersections between birds and elements of landscape/architecture. Very simple concept, very well executed, beautiful result. Thomas Newton’s webpage:
http://www.timestream-arts.com/

In the evening, Semiconductor performed at the BFI IMAX. The performance was divided in two parts. The first one was based on generating 3D visuals in real time reacting to the music. Simple geometric shapes composed together formed architectural landscapes, with strange alien creatures in them. The camera kept changing position. Very cinematographic and effective. The second one was the result of a residence at NASA: their archive footage was used to produce sound based on luminance levels. At the end of the show, I talked briefly with Semiconductor and bought their new DVD, Worlds in Flux. Semiconductor’s website:
http://www.semiconductorfilms.com/

The third day was mostly dedicated to Peter Greenaway’s work: he held a talk in the afternoon and a performance at the IMAX in the evening. The talk was quite interesting, Greenaway is charismatic and provocative. The title of his presentation was “Have we seen any cinema yet?”, and he claims we haven’t. He considers we have only seen a “prelude” to cinema, and he argues that the TV remote, introduced in 1983, put an end to this “prelude”. He also considers that there hasn’t yet been seen a “masterpiece” of this new cinema, and he set out to produce it with his “Tulse Luper” piece. He went on about the 4 tyrannies of cinema: the tyranny of the text, the tyranny of the actor, the tyranny of the camera and the tyranny of the frame. He defends a purer, more visual cinema experience. I didn’t see his “VJ” performance of Tulse Lumper that evening at the IMAX because I attended the Optronia Lab performances at BFI Southbank.
http://www.tulseluper.net/
http://www.tulselupernetwork.com/
http://www.tulseluperjourney.com/

At the Optronica Lab, four projects were showcased. From these, I would highlight reactable, which was a huge success at Optronica. This was the second time I saw it, and much work has been done since I played with it a year ago at Universitat Pompeu Fabra in Barcelona.
http://www.iua.upf.es/mtg/reactable/

Rechenzentrum also did a very interesting (although conventional, by comparison) performance that evening. Elegant and subtle visuals.
http://www.rechenzentrum.org/

Saturday was the last “full” day of Optronica. The programme began with “Big in Japan”, a screening of Japanese music-related animation.

After that, audio-visual artist Ryoichi Kurokawa (has worked with Sketch Show, Ryuichi Sakamoto) performed. It was one of the most memorable performances of Optronica, with two-screen projections, in tight articulation with the music.
http://www.ryoichikurokawa.com/
Some photos from his performance:
http://www.flickr.com/photos/tags/ryoichikurukawa/

After that, I attended the “OUT OF SIGHT, OUT OF MIND: ARTISTIC EXPLORATIONS IN SYNAESTHESIA” talk by Dr Jamie Ward, Samantha Moore & Simon Ings. For a detailed report on this talk:
http://www.nunocorreia.com/academic/200703-optronica-festival-talk-out-of-sight-out-of-mind-artistic-explorations-in-synaesthesia

From BFI Southbank, we went to the Optronica Party at Institute of Contemporary Arts (ICA). Because I attended the previous talk, I missed Emergency Broadcast Network’s (EBN) performance. That was unfortunate – EBN are one of the pioneers of the genre. EBN were formed in 1991, and have been featured in many festivals and books about new media (namely, they were mentioned extensively in Bolter and Gruisin’s Remediation).
http://en.wikipedia.org/wiki/Emergency_Broadcast_Network
But I managed to talk for a while with EBN’s Brian Kane, author of arguably the world’s first video samler, VuJak. Some links:
http://en.wikipedia.org/wiki/Vujak
http://www.briankane.net/

At the ICA event, I saw a show by Jochem Paap (aka Speedy J, music) and Scott Pagano (visuals). This show, together with Semiconductor, Reactable, Rechenzentrum and Kurokawa, was, in my opinion, one of the best of Optronica. Jochem Paap and Scott Pagano have just released a DVD, Umfeld. I spoke with Scott after the show and exchanged DVDs with him.
http://www.neither-field.com/
Apple has just showcased Scott Pagano in one of their Apple Pro profiles:
http://www.apple.com/pro/profiles/pagano/

On Sunday I attended the “PROJECTED LIGHT & COLOUR: EARLY VISUAL MUSIC, COLOUR ORGANS & LIGHT SHOWS” talk by Cindy Keefer (Centre for Visual Music, CVM, Los Angeles). After the talk, I bought the DVD CVM has release about Oskar Fischinger’s work. For a detailed report on this talk:
http://www.nunocorreia.com/academic/200703-optronica-festival-talk-projected-light-and-colour-early-visual-music-colour-organs-light-shows