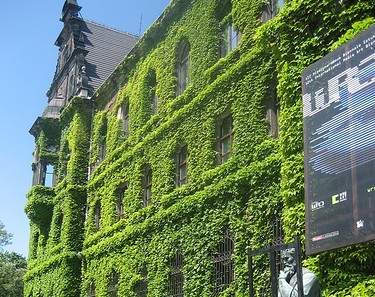 The WRO 07 biennalle took place in Wroclaw, Poland, between 16 and 20 May 2007. I performed there on the 19th May, with André Carrilho, under the name Video Jack.

The festival had several categories (video art, URL, hardware/software, installation, performance), and took place in several locations throughout the city. Our audio-visual performance took place at the National Museum, a beautiful, grandiose, building. It was part of the competition, along with 88 more works. The festival received about 1500 entries. We showcased the “Heat Seeker” audio-visual project.

The festival was very well organised, and with very good promotion all over the city. You could not avoid the festival if you were in Wroclaw. The media coverage was also extensive (we were interviewed for Polish TV).

The city itself is very beautiful, with impressive architecture, many islands and over 100 bridges.

3 prizes were awarded, and 2 special mentions. The winning works can be checked here:
http://wro07.wrocenter.pl/biennale/index.php

Unfortunately, I did not have time to watch all the works in the festival. My favourite work was the “Living Stereo” audio-visual performance by Uruguayan Brian Mackern, who used a Flash-based “music box” to build an experience that had influences from cinema, software aesthetics, and graphic design. Brian won a special mention.

Links to photos of the performance:
http://www.flickr.com/photos/nunocorreia/tags/brianmackern/

Links to photos of the performance:
http://www.flickr.com/photos/nunocorreia/tags/incite/

The festival ended with a performance by Scanner and D-Fuse. Great music by veteran Robin Rimbaud. Very good visuals by D-Fuse (who wrote the excellent “VJ: Audio-visual Art and VJ Culture” book). This performance was not in the competition section.

Links to photos of the performance:
http://www.flickr.com/photos/nunocorreia/tags/scannerdfuse/

WRO is said to be the oldest media art festival in Easter Europe. This excerpt from an interview to festival founder Piotr Krajevski is quite interesting (from http://subsol.c3.hu/subsol_2/contributors0/wrotext.html):

“Actually, we started our activities even earlier. The first WRO festival was organized in the first week of December 1989. This was quite a special time: three weeks after the Berlin Wall fell down and several months after the first free election in Poland. We were witnessing pivotal changes taking place at that very unique moment, although their meaning was not entirely comprehensible for us.

All in all, the euphoria felt around that first WRO event was optimistically taken as a clear sign that there was something new for art, too. That was actually how what we were doing was perceived in Poland – as a sign that culture was renewing itself, as politics was. A minimal budget was sufficient because the post-communist economy allowed setting different activities up without having solid financing.

The biggest part of this pioneering WRO festival was filled with video-art and computer animation shows, which were in the mainstream of new media at those times. These were shown on what seems to have been the only video projector in Poland then, borrowed from the Polish national TV. Along with this we carried out many other things, the Amiga computer animation pieces, the first interactive and multimedia performances, and a bunch of bizarre concerts. We presented all the tapes we were sent without any selection – and there were over 200. This seems hard to believe now but the audience stayed for everything. They booed and whistled at mediocre works but stayed and kept watching. A terrific atmosphere of discovering new worlds accompanied these shows, concerts and exhibitions, and that feeling was shared by several thousand audience members who attended the event.

WRO was not only the first such event in this part of Europe but also, which is remarkable, it was perceived immediately as a big media festival and gained wide recognition.”