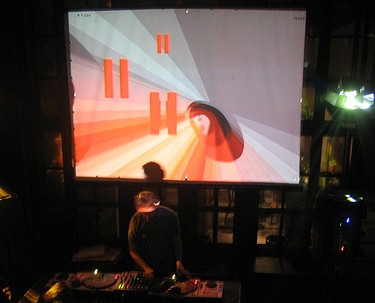 In June 1st 2006 I participated in the VJ Factory Festival, organised by MediaLab Tallinn / MARTU (http://www.martu.org).

Pink Twins, from Finland, performed there. They used Max/MSP/Jitter and SuperCollider to build an intense atmosphere, sonically dense and visually very colourful.

Link to photos of their performance:
http://www.flickr.com/photos/nunocorreia/tags/pinktwins/

After the Pink Twins performance, I taught a short workshop. Because of the duration of the workshop (2 hours), teaching something too technical was impossible. In my view, the requirements for such a workshop were:

– explore connections between music and visuals;
– that had little technical requirements;
– that would allow to quickly create visual material;
– that would be very hands-on.

The solution I came up with was to create a VJing tool, named “Bio Photo”, that would sequence photos taken by the participants. Therefore, the participants only had to bring digital cameras and a cable (or other means) to upload the photos to my computer. This solution was also quite suited to the location, which has a lot of potential for photography.

The software was built using Flash, and allows to navigate in folders (photo “rolls”) to select two rolls. The application then runs through the photos in the rolls, using animated or static masks to convey complexity and add interest to the visual collage. Meta-information on the photos is shown onscreen (but can be hidden). Solid colours can be used instead of photos. The speed of the application can be altered.

After a short intro and briefing, the students had 30 minutes to collect the images. We then uploaded them to my computer, prepared the XML meta-data for the images, and manipulated them using an automated Photoshop Action I had prepared earlier. This process took 45 minutes.

The next 30 minutes were spent combining the visuals with the music (by a local DJ), using the tool. The participants felt quite at ease with the tool, and the general feedback was very positive.

Later that evening, in the second part of the festival, I performed at a club called Von Krahl. I used both my own material, using older tools, and the new tool together with the student’s photos. The result was effective, and the audience was very enthusiastic.