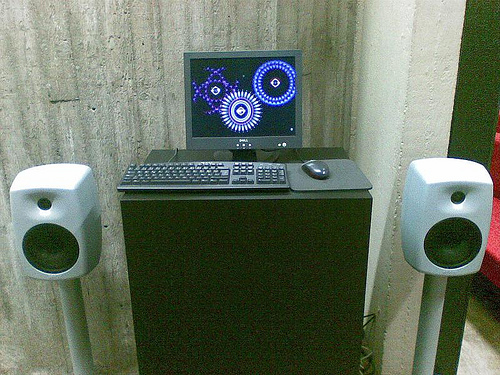 Cartes Flux Festival took place between 6 May and 18 May 2008, in Espoo (Helsinki area), Finland.

Notions of perception, time and subjectivity are central to all art, where traditionally the visual arts have been understood as spatial and music as a temporal. Audiovisual new media art proves this division to be problematic. It permeates the division of perception and allows us to build our perception anew. In this new setting the subject becomes a mechanism to articulate time and space entwined.

2. Participation at the festival

Video Jack’s project AVOL was shown at the festival as an installation, at the WeeGee building (also home to EMMA – Espoo Museum of Modern Art). The project benefited from a good exposure of the WeeGee building entrance, and good sound system, but the screen was too small for an immersive audio-visual experience (in my opinion).

I was present at the opening. From the remaining projects shown, I would highlight Marko Timlin’s “A room: a project: 13 days“, an intriguing PureData-driven 13-day exploration of washing machine acoustics, metallic sounds and white room aesthetics…