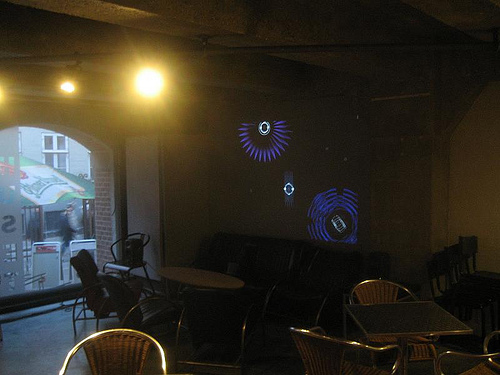 The Re:New digital arts festival took place between 16 and 23 May and featured “more than 150 works of music, video, and installations in any form and combination.” (http://www.re-new.dk/2008)

2. Presence at the festival

Video Jack’s project AVOL was shown as an installation at Huset i Magstraede, a charming arts complex in the center of Copenhagen.

From the performances and installations I saw at the performance, I would highlight “Ultimo esfuerzo rural”, by Bosch & Simons, a truly unique installation: a series of large wooden farming forks were set against the windows of the building, with computer-controlled motors underneath that made them “scratch” the windows at regular intervals… The reactions of passers-by were hilarious.
http://www.boschsimons.com/

Martin Aaserud showcased “Breed & Weed”, a project where each one of four sound “eggs” (real physical objects) emitted sound that was affected by the presence of other “eggs” nearby.