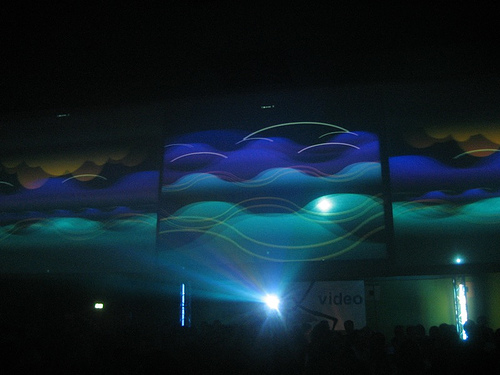 The 17th Bochum Videofestival took place between 14 and 16 of June 2007. It was mainly composed of an international video competition and a VJ contest. There were also other categories and events, such as: installation, video slam, parties. The festival was well organized, with a lot of care and nice touches, by a very young team of students from the university.

The VJ contest involves 5 teams, each performing in 30 minutes. The winners are chosen by a jury.
From the http://www.videofestival.org/ website:

“In its first year, the Contest started as an experiment, created to give the expanding art of VJing a stage to prove its artistic significance. Meanwhile, the Contest has become one of the major parts of the Videofestival and is established as equivalent to the main International Video Competition. The Bochum concept is, as far as we know, still unique for a VJ Contest: presenting a 30-minute live set in front of a seated, attentively observing audience. This procedure stresses particularly the visual level – in contrast to the usual situation inside a club. For us, the emphasis is placed on the formation of images. This special focus has modified the VJ Contest over the past years in reference to the presentation of VJing in general. Every year, less and less traditional club visuals were shown. The amount of VJ sets, characterised by a more experimental approach to the processing of images (that could even include a step ‘back’ to analogue technologies) became larger every time we set up the program. ?The image counts!”
In the past, well-known VJ teams have participated in the contest, such as Pfadfinderei, Vitascope, Exceeda and D-Fuse.

This year, the participants in the VJ contest were:

A 6th team, MFO, participated as a special guest in one of the parties (extra competition).

The winners were the 2 german teams.

Although we did not win, we had a great time there, and saw some great performances.

My favorite performances were by Quayola and MFO.

Quayola is Davide Quagliola, an Italian VJ and motion graphics designer living in London, who has made videos for labels such as Minus, Spectral (namely for Audion), Playhouse and Trapez. He has collaborated with VJ teams such as UVA, D-Fuse and Addictive TV. He is presently developing work for a competition organized by onedotzero and MTV. His set, entitled “Path to Abstraction” was very geometric and abstract: simple shapes reacting top the minimal beats and sounds. I had seen another of his works at Optronica, entitled “Architectural Density”, also quite interesting.

MFO (Marcel Weber), from Leipzig, presented Aviorama, a performance of about 1 hour, with images of airports and aviation, for 3 contiguous projections (forming a panorama, hence the name). The images were of very high quality, and the use of the panorama very ingenious: Marcel would switch from one to 2 or 3 images, in a highly dynamic and mesmerizing performance. Talking to Marcel, I found that he used a combination of Arkaos (just for receiving the Flash images and distributing it to the 3 screens), and 2 Flash files communicating with each other with local connect (one with all the control parameters, and another with the images, inside Arkaos). The music, a DJ set by DJ Repeatbeat, also from Leipzig, was very well coorsinated with the visuals (and vice-versa).

The festival took place in the The Ruhr-Universität Bochum, a unique university: a huge complex of buildings, combining a very 60’s “brutalist” appearance with beautiful natural surroundings. The university has 32.000 students. It was the first new university to be founded in Germany after the war.

We also performed at the closing party of the festival, as VJs. The setup was quite interesting, with 3 projections in the middle of the room, and one bigger one behind us.